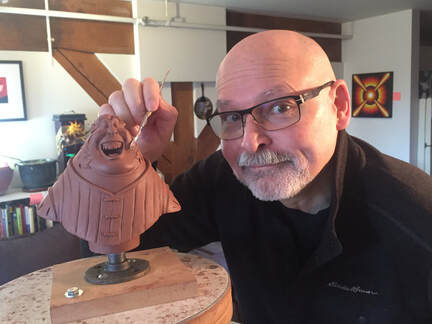 ​My name is Jonathan Paine, and I’m a digital character sculptor, character modeller and toy maker. You’ve seen my work in the Oscar Winning films THE INCREDIBLES, RATATOUILLE and UP, as well as the Oscar nominated CARS, ICE AGE, LIFTED and BOUNDIN’.

I have created whimsical toys such as a series of STAR TREK saving banks and talking lunch boxes. In 1995 actress Kate Mulgrew (Star Trek Voyager) gave a Ferengi character lunch box to comedian and host, Jon Stewart during her interview on The Jon Stewart Show.​
Toy product clients include: Disney Consumer products, Warner Bros., Thinkway Toys and Kraft General Foods. I am currently developing a series of original bathtub toys that include a series of lovable monsters!

TOY PRODUCTS:
• Disney Consumer Products
• Warner Bros
• Thinkway Toys
• Kraft General Foods
At the start of the pandemic lock down in 2020, I participated in a behind the scenes studio tour presentation for the Shiflett Bros. Sculpting Forum on Facebook. I apologize for the shakiness of the video. I was actually kind of nervous, never having done anything like this before. This gives you a peak into my studio and I explain briefly how I create some of the toys and sculptures you see on this site.

Caricature Work "Maggie & John", based on Illustrations done by Wael Safwat and Sebastian Kruger.
Jonathan's career in the arts has spanned 30 years. During this time he has had the opportunity to  work in many diverse fields such as animation, puppetry, toys and education. From sculpting toys for Disney and Warner Bros, to sculpting and modelling characters for Oscar winning films such as The Incredibles and Ratatouille. He continues to enjoy teaching his popular workshops and has taught close to 1,000 students from all over the world.

From a very early age Jonathan remembers being captivated by movies.  Whether it was film or television, what intrigued and excited him most were characters from films and shorts such as The Jungle Book, What's Opera Doc and all things Looney Tunes, The Frog Prince by Jim Henson and the Muppets, anything by Ray Harryhausen, Planet of the Apes and Star Wars. Animated or otherwise it became obvious to him that this was the direction with which he wanted to pursue a career.
​
These early influences instilled in him the passion to create as a sculptor. Jonathan's career path has taken him from stop motion animator for commercials, a puppeteer with the Muppets, model making for commercials and television, sculpting prototypes for the toy industry, as well as sculpting of clay and digital characters on ICE AGE, Sausage Party, and Oscar winning films such as THE INCREDIBLES, RATATOUILLE, and UP and several Oscar nominated shorts including BOUNDIN', ONE MAN BAND, and LIFTED. Jonathan also teaches his sculpture courses at Think Tank Training Center a comprehensive training facility for 3D animation, Visual Effects and Game Design in beautiful North Vancouver.
Watch the interview on the Louise H. Reid Show