Sculpting is my first love and I sculpt whenever I get some free time. In the 90’s I had a toy and figurine prototyping business and had clients such as Disney Consumer products, Warner Bros., Thinkway Toys, Centura Brands and Kraft General Foods. 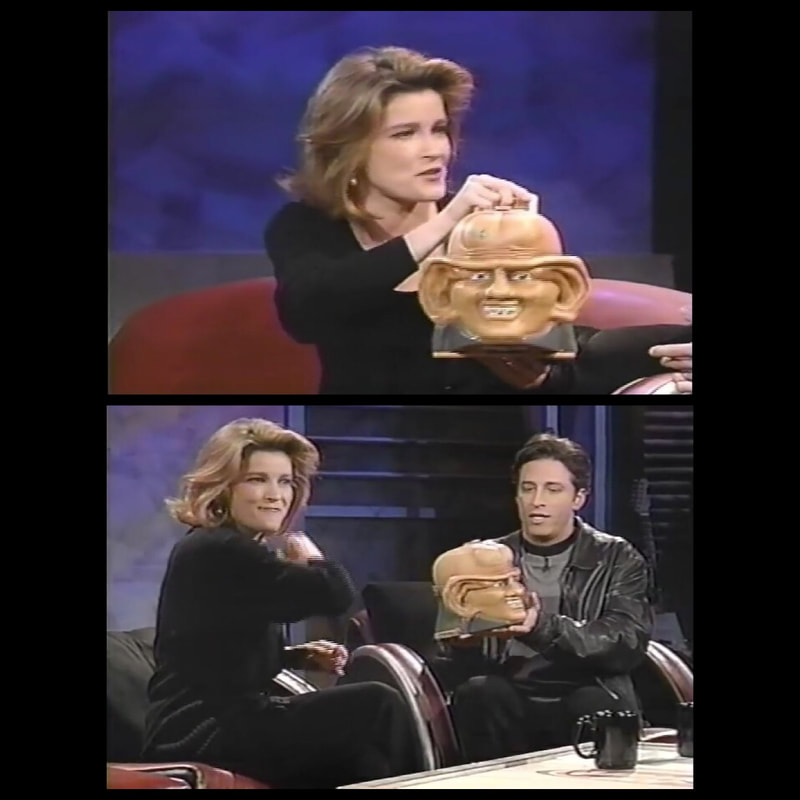 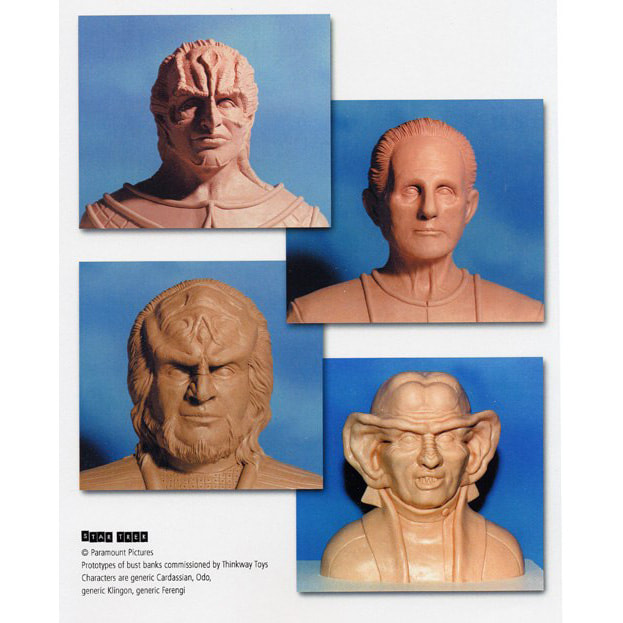 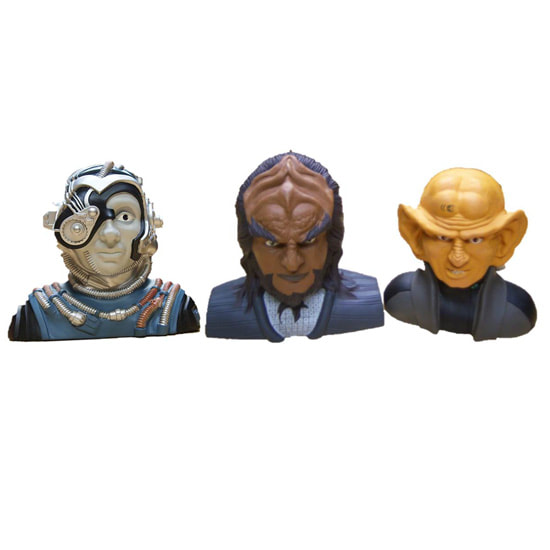 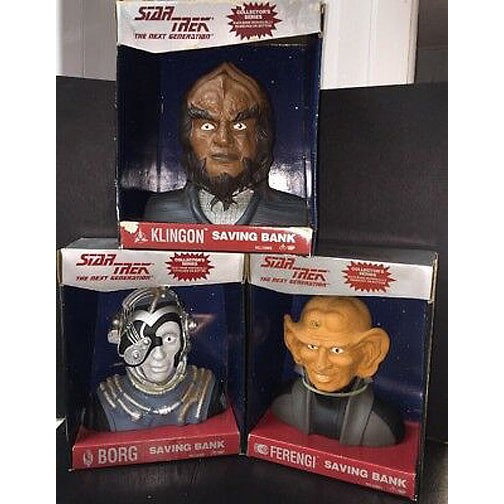 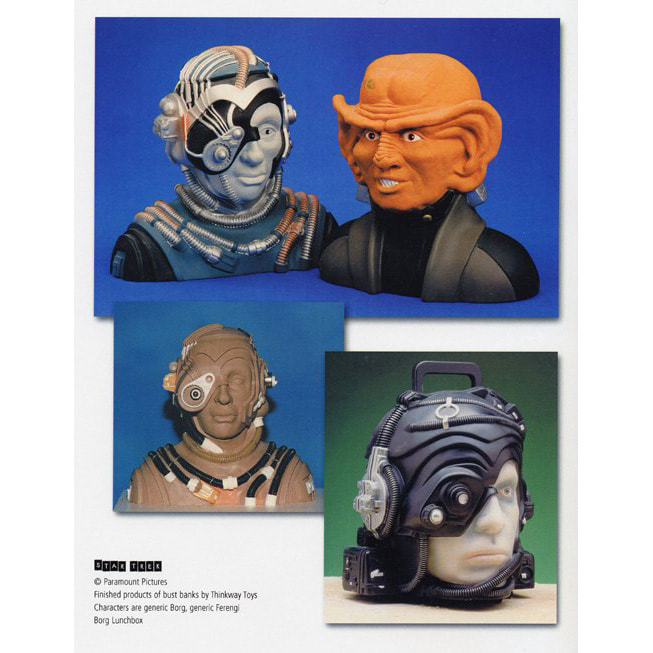 See video clip of Jonathan Paine's Star Trek toy on The Jon Stewart Show: CLICK HERE
In 1993 I was commissioned by an entrepreneur to sculpt the prototypes of a Borg and Ferengi Talking Lunchbox. One of the highlights of my early career occurred while I was watching late night television talkshow host Jon Stewart. When he introduced Kate Mulgrew as his next guest, I was blown away when she presented Jon with the Ferengi Lunchbox I had sculpted.
If you look at the painted Borg against the green background you may notice my likeness. I sculpted the prototype on top of a life cast of my own head. I thought it would be quite the thrill to have 100,000 copies produced of my head and sold on the shelves at Toys R Us! I have no idea how many actually were produced.

Between 1990 and 1994, I produced a series of toy prototypes for Thinkway Toys. The photos above are of clay prototypes and finished Star Trek Bust Banks.. 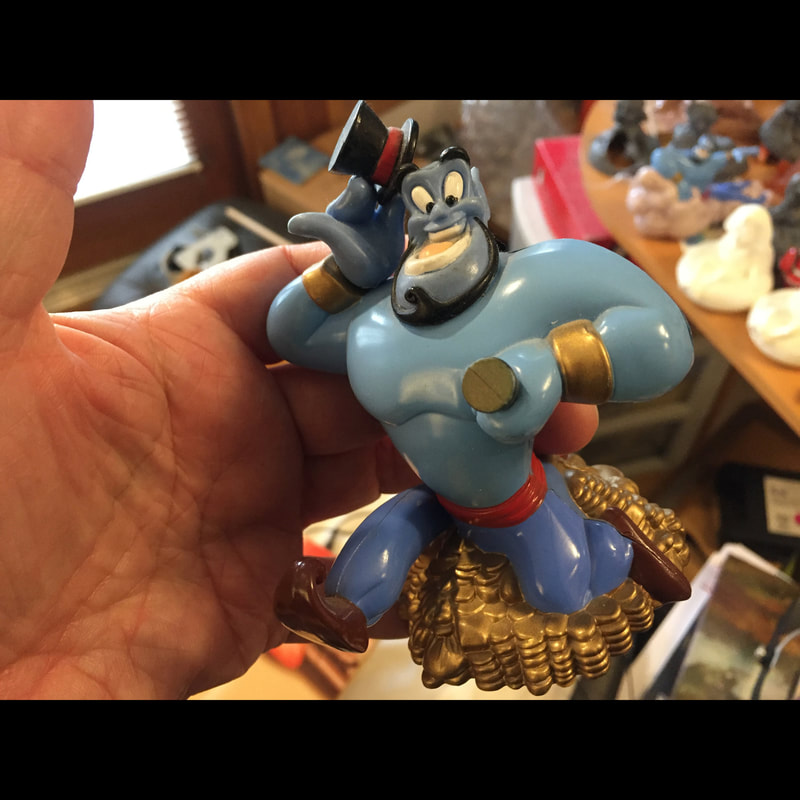 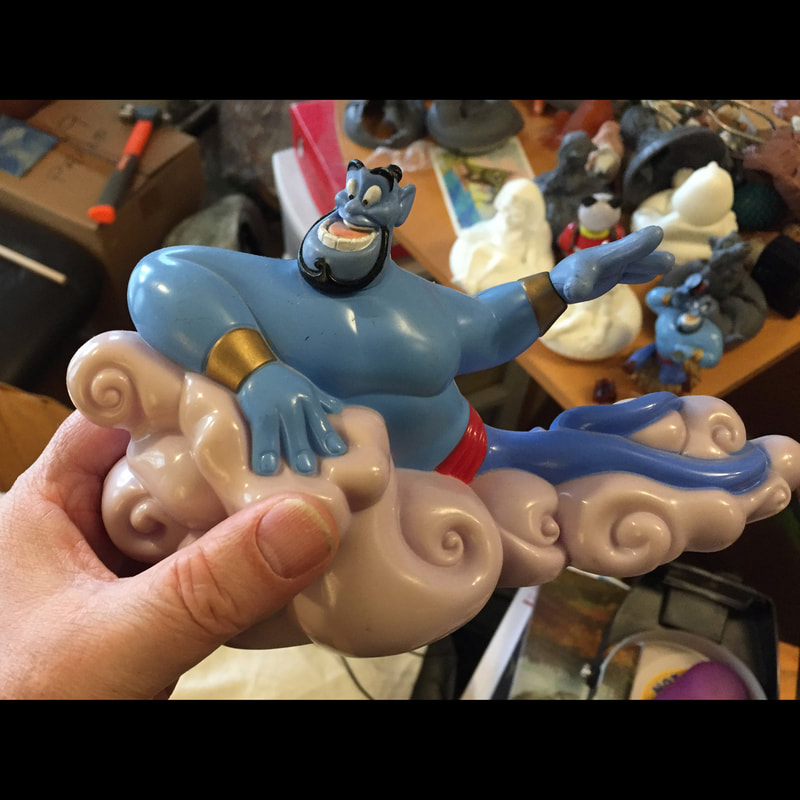 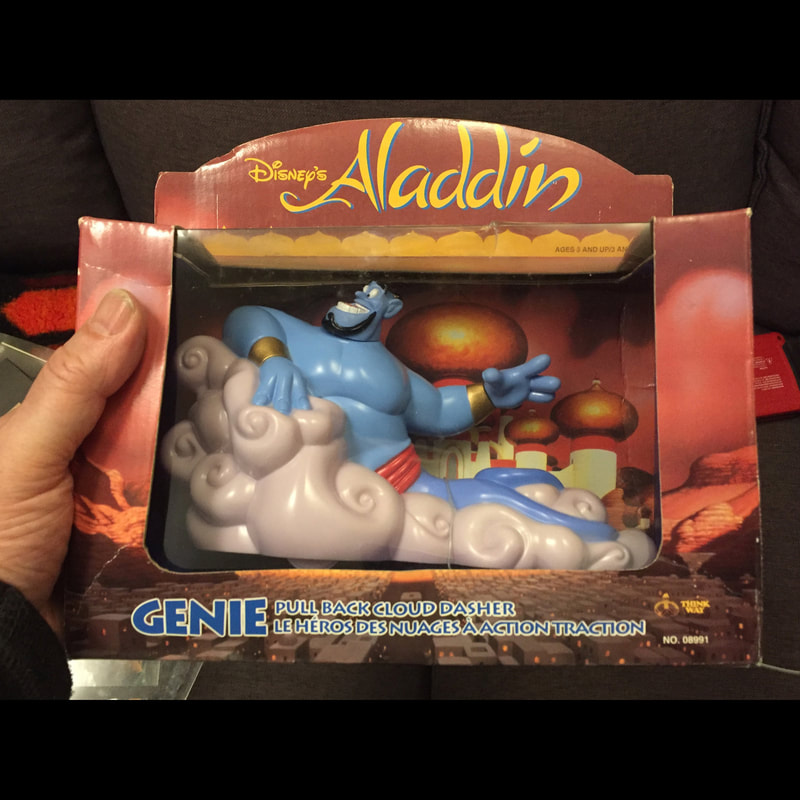 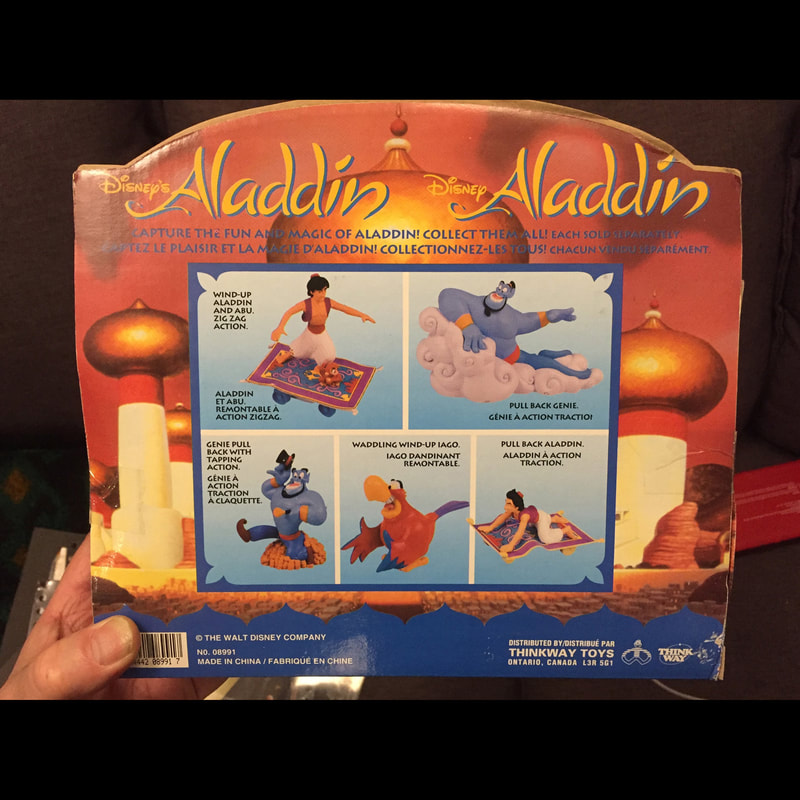 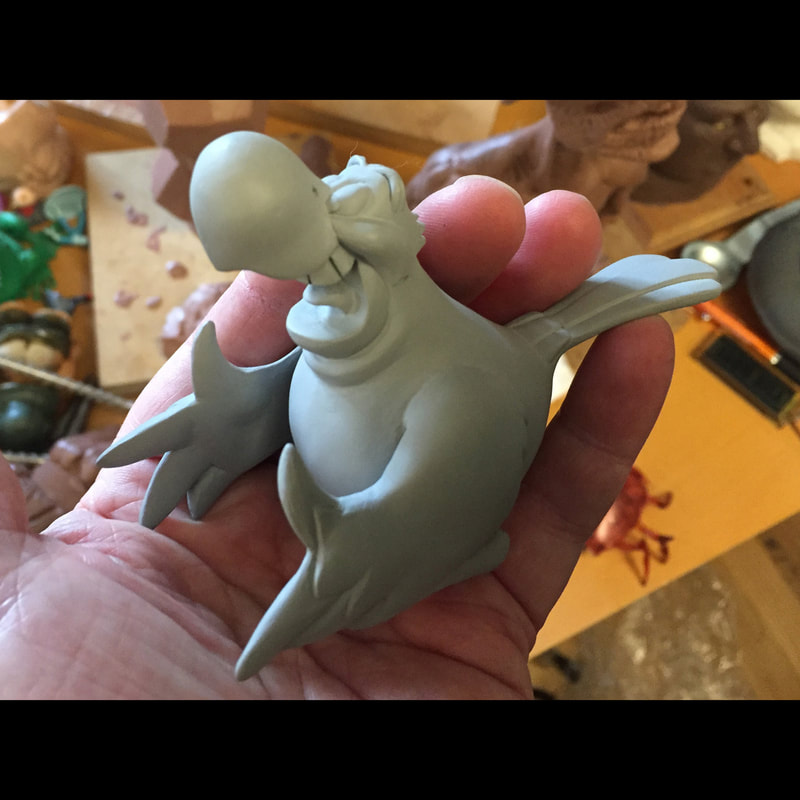 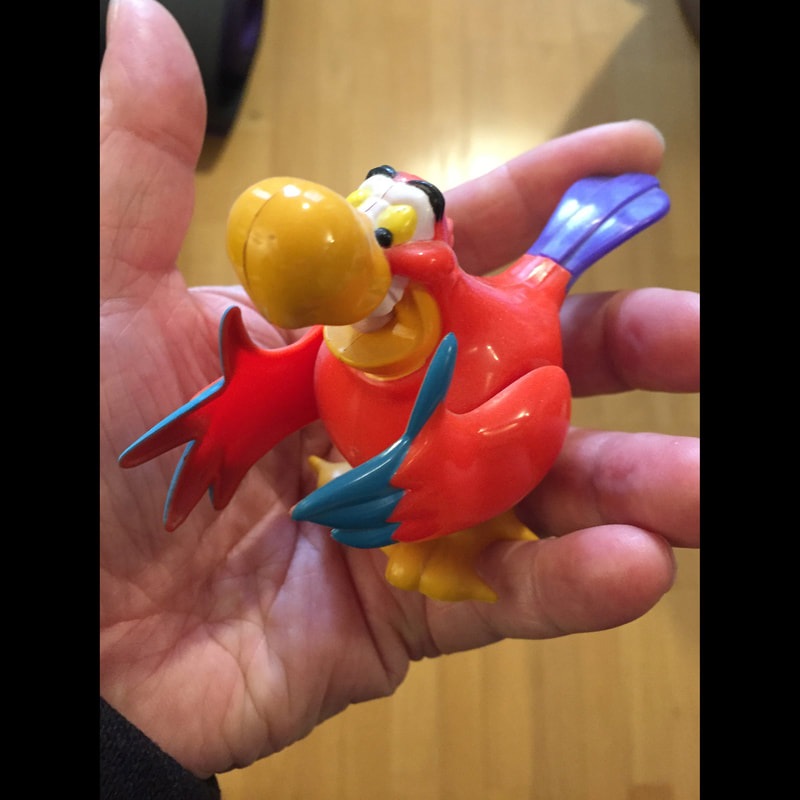 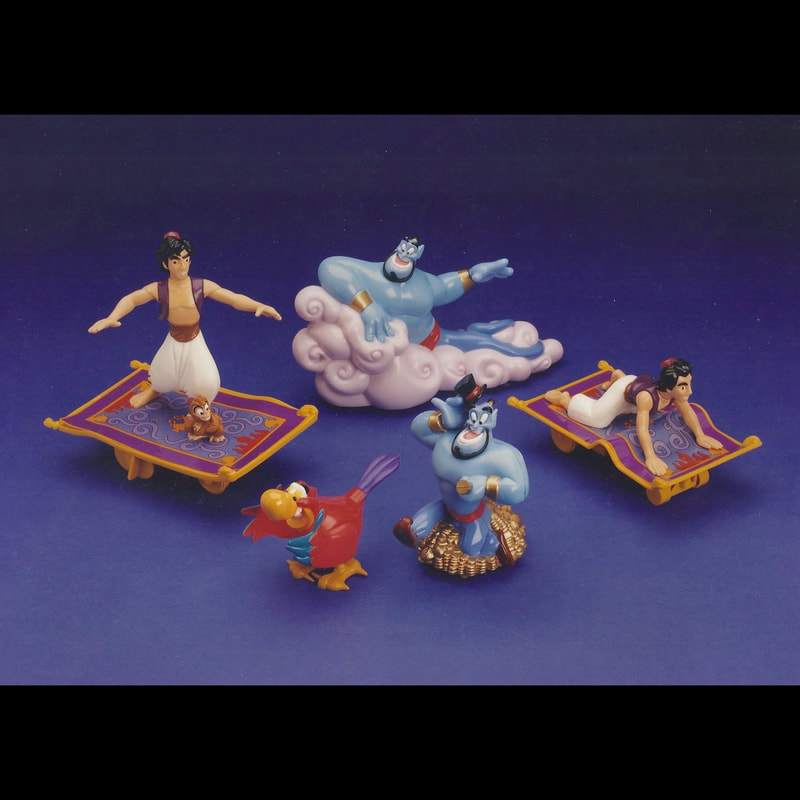 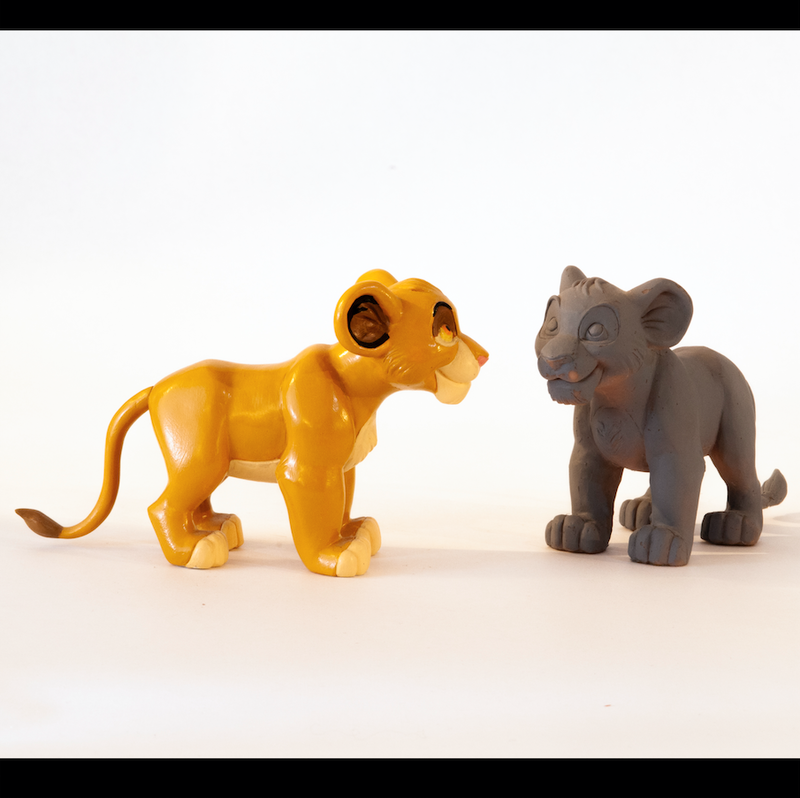 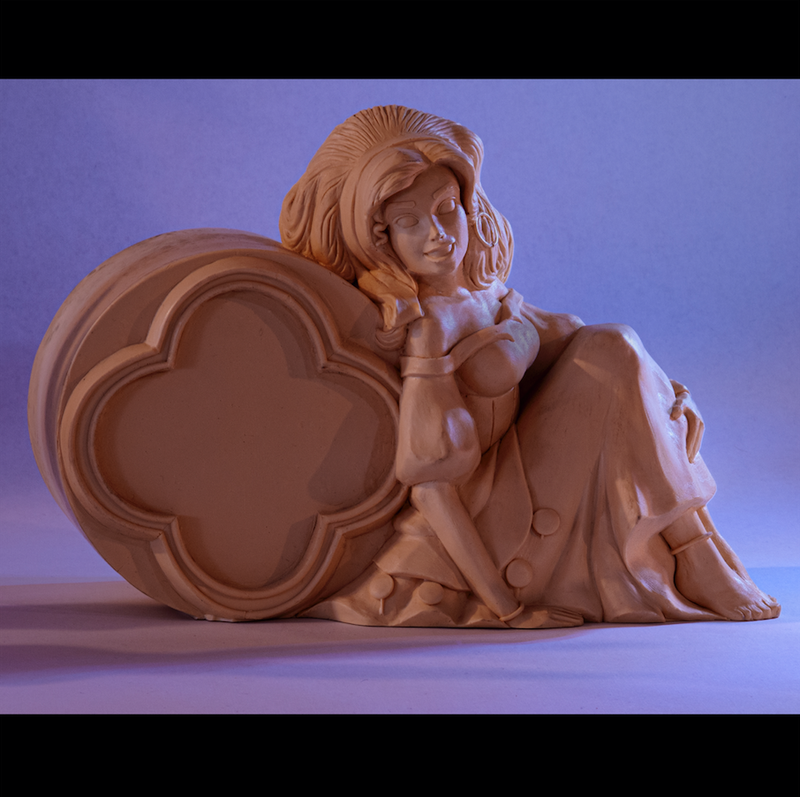 I sculpted a series of windup toys for Thinkway Toys to coincide with the release of Disney's Aladdin in the early '90's. I had a lot of fun with these and worked closely with the Disney designer Alvaro Cervantes on these. It was the first time I got to work with reference photos from the Disney maquette artist Kent Melton's sculptures for the film. He's an amazing and very prolific sculptor who has sculpted production maquettes for almost all the Disney characters from Aladdin onwards. 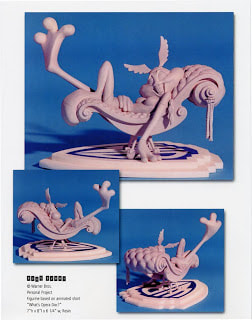 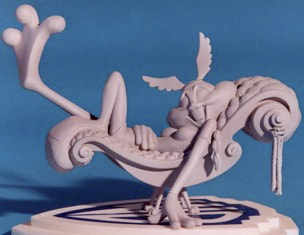 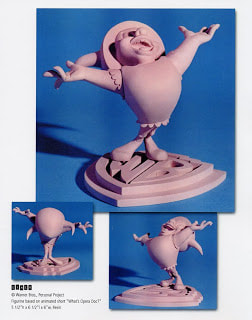 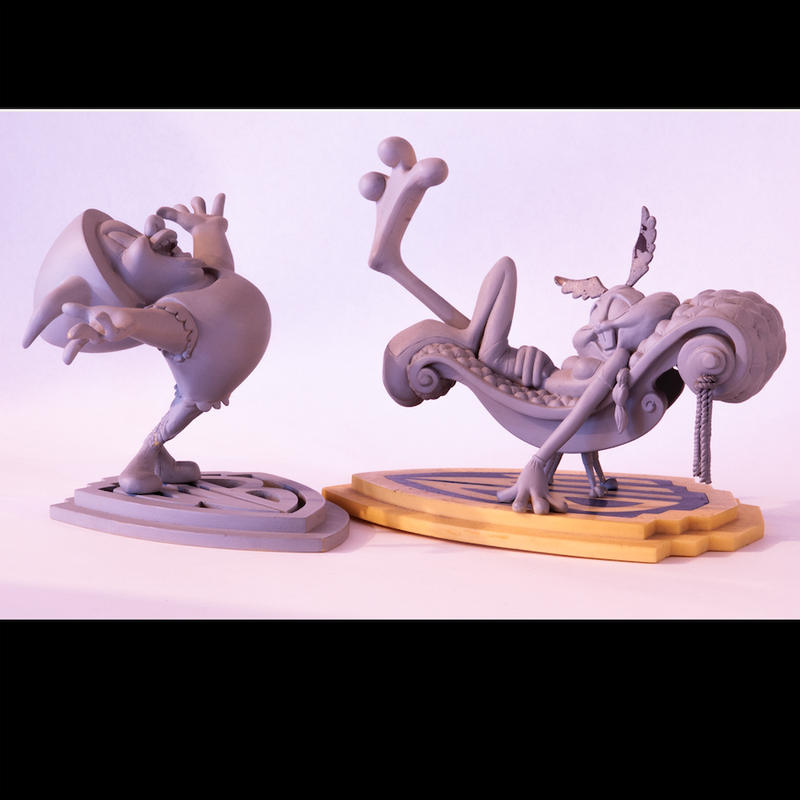 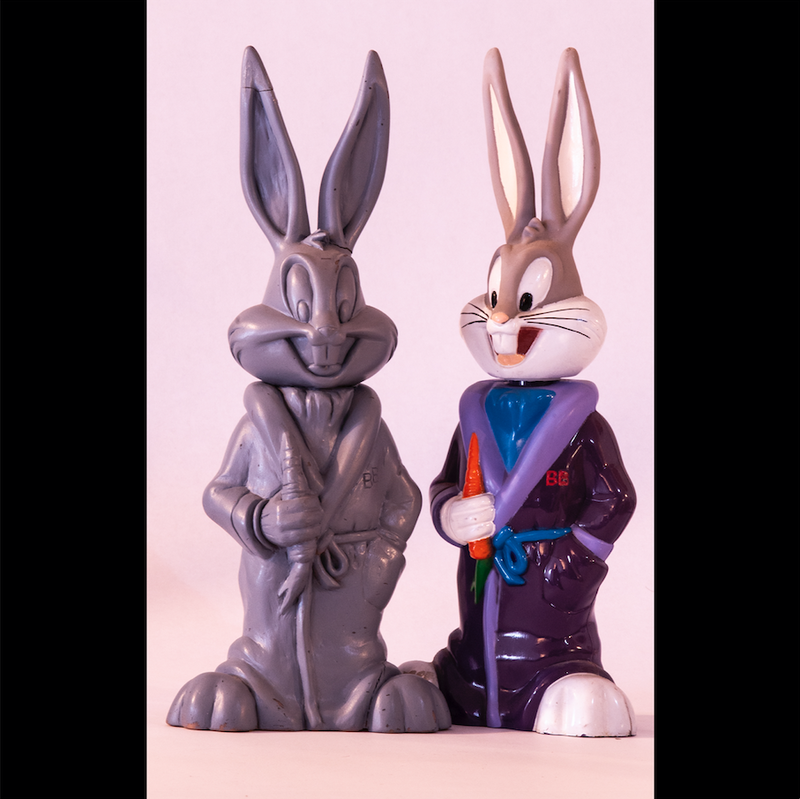 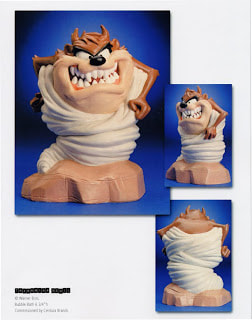 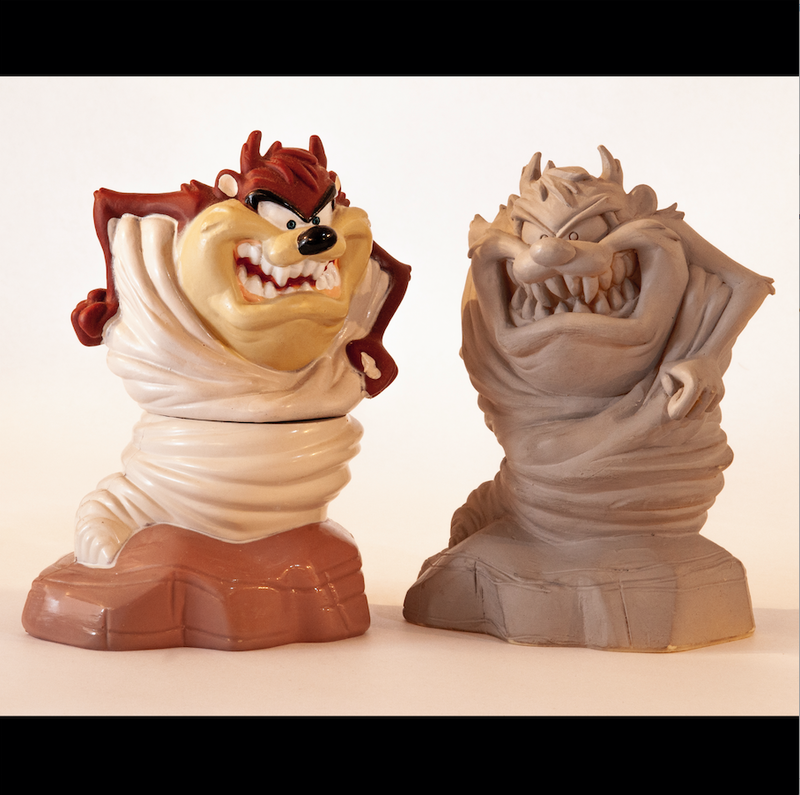 In the early '90's I was fortunate to get the contract for creating a couple of soap dispenser bottles for Centura Brands of my favourite characters Bugs Bunny and Taz. After moving to Vancouver, I decided to sculpt two pieces from my favourite short 'What's Opera Doc?' Bugs Bunny appears in drag as Brun Hilde riding on the back of a huge ornate horse. Upon seeing Brune Hilde, Elmer Fudd, with his spear and magic helmet, falls instantly in love and proceeds to try and woo Brune Hilde. This short regularly appears in lists of favourite all time animated shorts.

Not Another Rubber Ducky - Bath Toys 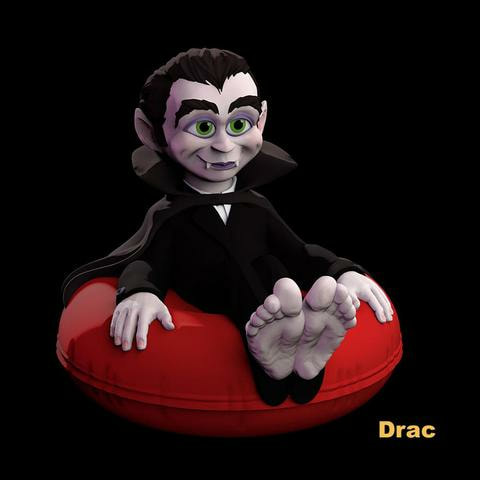 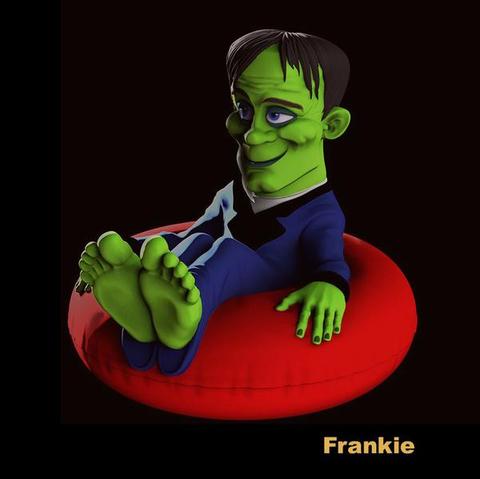 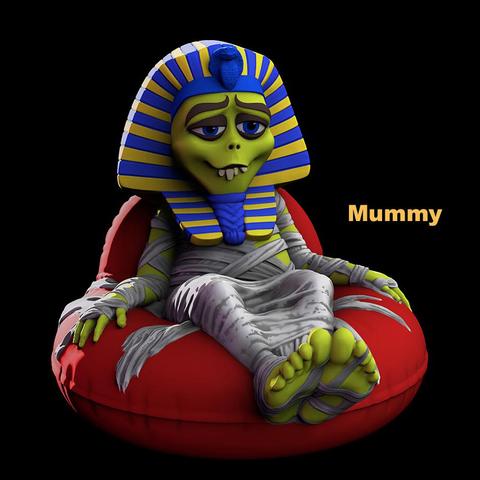 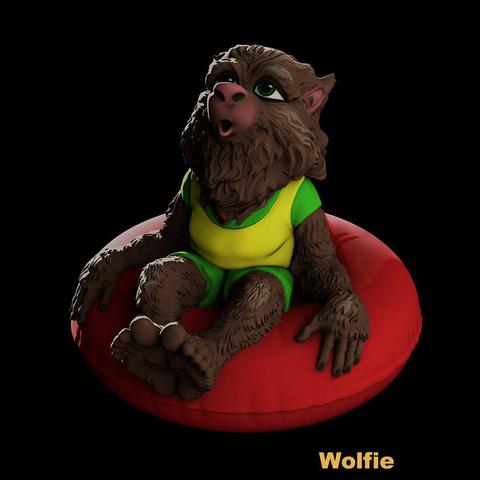 I have been wanting to sculpt my own line of toys for years and have finally done so with these four loveable classic monster floating bath toys. Growing up, I was heavily influenced by these classic horror monsters. I think I must have seen Frankenstein, for the first time, when I was about 5. I used to love watching horror movies sitting between my parents on the couch when I was about 5 or 6. In sculpting these toys, I wanted to create something that would be a charming way to introduce these tales to children without having to relay all the scary backstories. What a better way to keep these characters light and fun, than putting them on floating rubber inner tubes to play with in the bath? Each of these toys is sealed and weighted, so they float upright and don't accumulate nasty mold. The material is  Phthalate free, BPA free and Lead free. 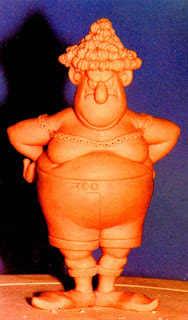 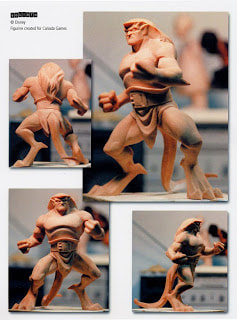 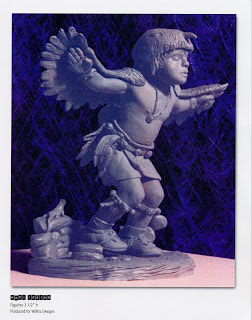 As a kid, I used to spend my pocket money earned from newspaper delivery and gardening on Marvel Comics and Mad Magazine. One of the artists I loved was Don Martin. His quirky style really appealed to me with his rubbery fingers and toes, not to mention the fabulous expressions. I still have some sketchbooks with my take on his style. One day in the late 80's I sculpted this figure of an annoyed housewife, who was glaring down on her sheepish husband. I loved the attitude and wanted that depicted in a figurine for myself.

The second sculpt is of Goliath from Disney's Gargoyles TV series. This was before I sculpted the wings, which unfortunately I have no photos of. I don't think this toy ever made it into production.

The third toy is a tiny sculpture I did for a figurine Willits Designs. I found out during this sculpt, that I really prefer not to work on such a small scale of only 3 1/2" high. It's hard on my eyes and I hate having to wear jewellers glasses whilst sculpting. I  rarely do work at this small scale now. Unfortunately the eyes I sculpted were a little off and consequently the piece was never produced. Can you see the iguana? He was about 1/2" long. I wish I had a copy of this prototype, but there was no time to cast the piece before shipping it.